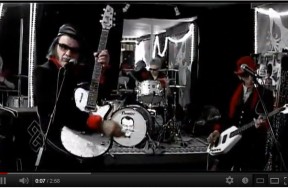 The Bermondsey Joyriders NOISE AND REVOLUTION A band hewed from Punk’s 70s heritage, the band seems to capture the times were living in with the release of ‘Noise and Revolution’. Eleven tracks comprising punk, rockabilly, slide guitar and distorted chords interspersed with social commentaries and anecdotes from a narrator that could pass for Billy Gibbon and his Southern Drawl.

Tracks like ‘London Bridge’ extolling the virtue of standing strong quickly followed by the herbal benefits of tea drinking. There is no let up in the musical observations with ‘Proper English’ that pokes fun at the English Psyche as only the English can.

1977 is a musical history lesson with its Pistols opening from a band that experienced it first hand, interspersed with a modern call to keep questioning the state and hold them to account.

The album has more autobiographical feel to it, each spoken word section revealing more about the band with the next track expanding on the story. This leaves the listener intrigued as the plot thickens but the highest point is the reference to the ‘Shaking Leaves’ club and its reputation for having a hot desirable clientele.