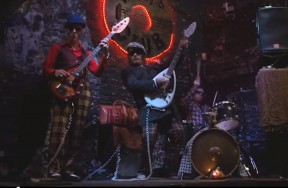 “Society Is Rapidly Changing” – an interview with the Bermondsey Joyriders

Here’s an interview Gary did for Purerawk.com

When it comes to the great albums of 2011 so far, it seems that there’s two types. Firstly the ones that are on the shelves already such as the Eureka Machines’ “Champion The Underdog” and the Urban Voodoo Machine’s “In Black ‘n’ Red” which you already know about. And then there’s bands who, if they can persuade a label to get their album out by December 31st, will almost certainly be up there. For example, anyone who’s seen Patchwork Grace recently would have to draw the conclusion that on te strength of their recent live shows they could potentially be sitting on an absolute belter. And so could the Bermondsey Joyriders.

The Bermondsey Joyriders are arguably the most surprising of the four to be in this bracket – they’ve been around for three or four years now and their eponymous debut album released in 2009 was a solid slice of punk-meets-blues rock with a healthy helping of slide guitar. Possibly what you’d expect from two punk veterans, Garry Lammin (formerly of the Little Roosters and Cock Sparrer’s original line-up) and Martin Stacey (once of punk mainstays Chelsea) trying something different.

The Bermondsey Joyriders’ new punk concept album (a brave move if ever there was one!) “Noise And Revolution” which sees them team up with MC5 collaborator John Sinclair. I recently had the opportunity to catch up with Garry Lammin just before the Joyriders’ gig at the 100 Club to find out a bit more…

PureRawk: The new album’s quite a departure from your debut – how did the change of direction come about?

Gary Lammin: Well, the first album was quite a departure as well from ordinary straight-down-the-line punk rock, it was mainly built around slide guitar. So for the second album I wanted to change things around again, break down what I’d built up previously. I’d been reading quite a bit about Bowie and I think he had the right idea by reinventing himself with each album – it’s like the Rolling Stones, they’re a band that everyone likes including me but the Stones in ’72 are the same as the Stones in ’82 or ’92…I guess what I’m trying to say is that you have to keep going forward and bringing new ideas in. I mean you can always go back and revisit things you’ve done before but I didn’t want to do another slide guitar album though that’s not to say that there isn’t slide guitar on this album. But while the last album was built around that, this time it’s not quite pushed to the fore as much.

Read the rest of the interview here: http://www.purerawk.com/2011/09/22/society-rapidly-changing-interview/